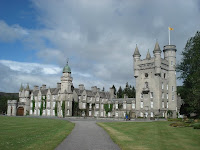 Saturday morning Meagan & I got up early to catch the first bus out of Aberdeen for our backpacking day. We road out to Balmoral Castle, which is the royal family's summer vacation home. The castle was first bought by Queen Victoria and has been used by the royal family ever since. During the late spring & early summer the grounds are open to the public. The public is only allowed into one room inside the castle which is the ballroom. For a ballroom, it seemed pretty small but they did show a video of a party/ball held in the same ballroom a few years before and it looked like it was big enough for traditional Scottish dancing. The gardens at Balmoral are huge, and grow quite a bit of food used in the kitchens. The castle employees a large number of people from the near by town. Interesting fact, the grounds include one of the last natural pine forest in the UK. 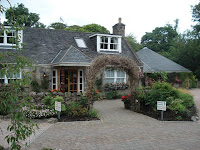 After we were done touring the grounds at Balmoral, we caught the bus & headed out to the town of Banchory. A cute little town in the Royal Deeside area of Scotland. From Banchory we hiked out to the bridge of Feugh to look at the falls and we found a cute little tea house to have lunch at. Lunch was not my favorite, but we did stay for tea & scones which were served with strawberry champagne jam that was just delicious.

We continued on our trip to Crathes Castle. Which is this wonderful old castle that the family actually still lived in up until the 1960's when their was a fire that destroyed the modern part of the castle. Luckily the original castle was left unharmed. The land that the castle is on was given as a gift by King Robert the Bruce to the Burnett family, the castle was built over several decades, being delayed due political problems during the reign of Mary Queen of Scots.

The castle is fairly nice, but the gardens are the amazing part. They were beautiful, you could really spend all day on the grounds, there was several hiking trails and camping areas. Unfortunately we only had a few hours before we had to get back to Aberdeen, but this is one place I would love to return to.

Tiah
Posted by Marston Girls at 8:36 AM No comments: 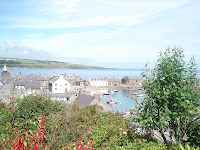 Our first full day here in Scotland, Meagan & I traveled by bus to the small coastal town of Stonehaven. She once lived here for a few months, so she new all the good sites, including an awesome ice cream shop where I tried Banoffee ice cream; very yummy.

It was here in Stonehaven that we hiked up the cliffs to Dunnottar Castle and had our picnic lunch. Very pretty. 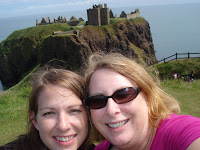 The next day, which was very sunny as well, we spent the day in Balmedie walking the sand dunes and exploring the beach. We found a ton of unbroken shells, and we seemed to be the only ones picking them up. My guess is that shell collecting is an American thing. 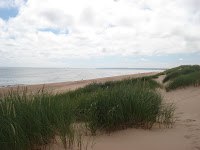 Posted by Marston Girls at 9:10 AM No comments:

We arrived in Scotland safely Sunday afternoon after a very long plane ride and a short stop in Paris. Where we had the most confusing plane transfer. It turns out we were arriving in terminal E2 and changing planes, departing at gate E23, which was very hard to figure out was actually still in terminal E2, but we had to leave security so that we could come back into the other side of the same terminal. Also, our lovely gate E23 was not where the plane was housed but the bus that would take us to the plane, a 10 minute bus drive which seem to take us through the French countryside.

All in all we had a good trip and are now staying with some wonderful friends of Meagan's.

Tiah
Posted by Marston Girls at 1:23 PM No comments: 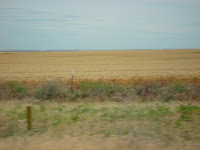 I hope you all had a good July 4th, celebrating our Nations birthday. We had a busy weekend, like almost all our weekends. Meagan had a friend from Scotland visiting, so she was out & about driving around Eastern Washington showing off all the great wineries, going hiking, and visiting farmer's markets around the area.

I went to my college roommate's wedding in Pendleton, OR. It was a beautiful day for an outdoor wedding in Eastern Oregon. I had not been to Pendleton for several years now, its probably been 10 years. The town has grown, although most of my memories about Pendleton are from when I was a small child. Although, it was amazing how many things I did recognize & remember, such as the McDonald's, the Skippers which is now a Starbucks & the office complex where Dad had worked. I even remembered the corner on Main Street, where one summer when I was about 3, it was so hot that my shoes got stuck in the asphalt while I was crossing the street with Mom. All in all it was a good trip.

Then of course we had a barbecue at Aunt Kenda's new house, which was the perfect spot to see the fireworks from her front porch. Something that we should do every year from now on.

As a side note - this week Meagan and I are getting ready to head for Scotland. Very exciting!

Tiah
Posted by Marston Girls at 7:57 AM No comments:

Marston Girls
This blog is about three sisters!

We usually have busy lives but we do like to keep in touch with our family and let them know what we've been up to. This is our way of allowing those we love but are not able to see all the time be apart of our lives. And we are thinking about all of you!

What We Are Reading